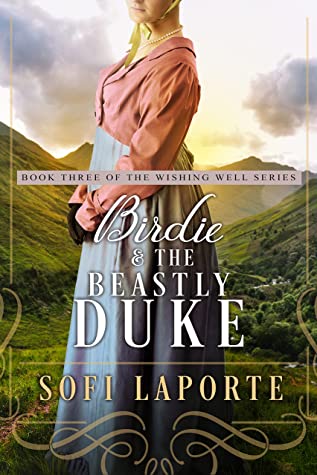 Well, here’s a thing – a Sofi Laporte book that didn’t have me squealing with delight. I’ve enjoyed both the previous books, so what went wrong with this one? Nothing in the writing, that’s for sure. Again the author creates an original and entertaining story out of seemingly tired old tropes. But for me it veered too far off the track of a conventional Regency and into the realm of straight-up slapstick Gothic. Not my favourite thing. But if you’re in the market for Laporte’s unique take on beauty (sort of) and the beast, this may very well hit the spot.

Here’s the premise: Birdie, or more formally the Honourable Roberta Talbot, is fed up with taking care of her feckless family. She’s on her way to a position as a governess in order to support them, but when she bumps into a girl travelling to an unwanted marriage, she can’t help but envy her. Marriage! That would suit Birdie down to the ground, even an unknown elderly gentleman living in the wilds of Scotland. Whereas the girl would just love to be a governess and escape her fate. And so they switch places…

Off Birdie goes, and from here on, everything is over the top Gothic. The mysterious coachman, the desolate castle perched on a cliff, the elderly (and very deaf) retainer who is the only servant, and the mysterious Captain Gabriel Eversleigh himself, who turns out to be not so elderly, but with his face disfigured by war wounds. Oh yes, and he’s now a duke, but you probably guessed that from the title. The marriage takes place, whereupon the bridegroom immediately gives Birdie a purse full of money and tells her to take herself off back to civilisation. He’s done his duty by her, as was promised to her father (or rather the father of the girl Birdie has swapped places with), and now he just wants to be left alone.

Birdie doesn’t want to go back to civilisation, however. She wants a marriage, even one as peculiar as this, and so she sets about getting servants, cleaning up the castle, starting a school for the village children and, all the while, getting under Gabriel’s skin and drawing him back into the real world. All of this is par for the course with this kind of story, but naturally Laporte puts her own delightful spin on it, and it’s all very funny.

I liked Birdie very much. She’s resourceful and practical and not in the least the delicate flower that well-brought-up Regency ladies are supposed to be. I liked Gabriel, too, when he finally emerged from his shell, but I’m not a big fan of a man (a duke!) who thinks he’ll just hide away in his tower and the world can go hang. He sounds like a good leader of his troops in the army and felt a great responsibility for them, so why could he not apply the same sense of duty to the villagers who depended on him? The ending tied up a lot of loose ends rather cleverly, and Gabriel finally does the right thing without prompting. And kudos to the author for getting the legalities of their marriage absolutely right.

Anyone reading this just for the romance would probably love it. I have a requirement that the author’s evocation of the Regency has to convince me, even if it’s not totally accurate. None of us lived in those times, after all, so who can say what is historically accurate? Every author creates a slightly different version of the era, and that’s all to the good. This was too unreal for me to believe in, however, which keeps it to three stars for me. Anyone less picky than me would probably love it, and it is certainly great fun. I already have the next (and possibly final) book in the series, so I’ll read that and hope it works better for me.