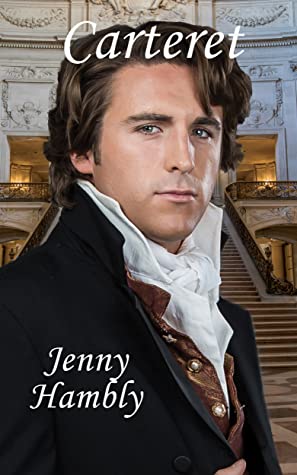 Another lovely read from Jenny Hambly, and for me this is the best of the series so far. Laurence is exactly my kind of hero – reserved, dignified and every inch the perfect gentleman. Heroine Cassandra is a feisty and determined lady, someone we can all root for. The plot unfolds smoothly, and is a joy to read.

Here’s the premise: Laurence, Viscount Carteret has his life in good order, keeping himself to himself and pursuing his duties with methodical conscientiousness. He’s on his way to his imposing country mansion when his quiet evening at an inn is disrupted by a very unlikely fugitive, in the shape of Miss Cassandra Fenton, who seeks refuge in his private parlour from a Bow Street runner. Surrendering to a whim for once, Laurence allows her to hide while he sees off the runner, then shares his meal with her before escorting her to temporary safety nearby, intending to return in the morning to see her to her destination. But Cassandra neither wants nor needs his help. She’s safer making her own way to her chosen refuge, the home of her former governess. Since they have been using only first names with each other, and neither knows where the other is bound, that would seem to be the end of that.

Well, there wouldn’t be much of a story if that were the case, so it isn’t very long before the two are thrown together again, and set about gradually uncovering the story behind Cassandra’s flight from her home, which resulted in the Bow Street runner being set on her, and also the mysteries surrounding the former governess and her home. And needless to say, they are also falling in love at the same time, and although things go along swimmingly for a while, it’s inevitable that someone as strait-laced as Laurence and someone as impetuous and daring as Cassandra would eventually fall out. When it happens, the quarrel is spectacular, and I felt all the gut-wrenching turmoil in both of them.

A wonderfully written book, a perfect evocation of the Regency. Five stars.