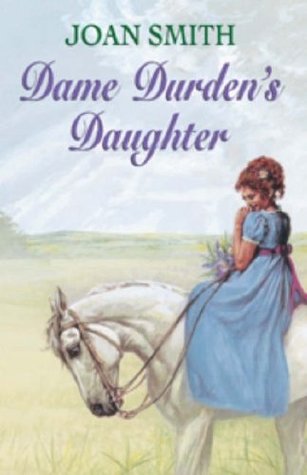 I’ve had this sitting on my Kindle for a while, but I was reluctant to start it, for some reason. My experiences with Joan Smith have been variable, to put it mildly, ranging from five stars to bailing out after a couple of chapters. This one seemed like it might fall into the oddball category, and so it does, but it’s also wildly funny, with some glorious exchanges between the two principals.

Here’s the premise: Edith Durden has been raised by a mother who lives largely in the past, feeling that their Saxon roots are far superior to the upstart ducal family living nearby. Dame Durden is convinced that a local clergyman, Dr Thorne, whose blood is as pure as her own, is the only proper husband for Edith. Meanwhile, the old duke has died, and the new duke, his rakehell only son, Helver, returns from a long sojourn abroad to take up the reins of his estate. He’s at first disgruntled to find that he must actually apply himself to the work, and then surprised to find that he enjoys it. The other surprise is that his childhood playmate, Eddie Durden, is now a rather attractive young woman, but it isn’t until she becomes engaged to Dr Thorne that Helver begins to take her seriously.

So here we have the classic betrothed-to-the-wrong-man scenario, the heroine knowing perfectly well that she loves Helver, but since he only seems to see her as a friend, and she has to marry someone, she settles for the rather dreary clergyman, convincing herself that at least she will be part of the village, instead of sequestered away with her mother, and therefore she’ll be able to do some good for the parishioners.

I liked Edith very much, and unlike in many such tales, she isn’t forced to marry by the machinations of her evil mother. Her mother, in fact, while being wildly eccentric and having one foot very firmly planted in the Tudor era, is nevertheless a perfectly kind and loving mother, who wants the best for her daughter. Given the lack of likely marriage prospects, she weighs up the two possibilities and discounts Helver at once because despite the good looks and charm, he’s far too wild to be marriage material. Besides, he shows not the slightest romantic interest in Edith. So Dame Durden pushes her daughter very gently towards the terribly respectable and upright Dr Thorne. It’s only after the betrothal, when she’s thrown into his company a lot more, that she realises what a dreadful loveless marriage it would be.

Helver is a fascinating character. Being the only child of his elderly parents, and discovering that every minor infraction convinces them that he’s akin to the devil himself, he not unnaturally decided he might as well not bother even trying to be good. It soon becomes clear that although he has been pretty wild, much of his reputation has been exaggerated and his devilry consists mainly of wandering around Europe wherever the whim takes him, and bedding willing women. All of which he cheerfully describes to Edith, regarding her as an honorary bloke, perhaps. But despite a certain selfish streak born of idleness, when he’s forced to accept his ducal responsibilities, he proves to have a good heart, more willing to see to the modest needs of his tenants than his own family.

There are no surprises in the way the story ends, but the question of how that point will be reached is very much up in the air. Helver is late to the realisation that he loves Edith, but since he is sure she also loves him, he’s determined to see off the obnoxious Dr Thorne and win his bride. But the wild streak in him means that the reader can’t be quite sure just how he’ll do it. It’s mentioned more than once that he’s capable of kidnapping her and whisking her away to Gretna, and so a thread of uncertainty runs through the final chapters. Will he just get impatient, or has he finally grown up enough to tackle the problem with intelligence? I won’t spoil the surprise by answering the question, but I highly recommend reading the book to find out, and, perhaps an even bigger inducement, to enjoy the wonderful banter between the two principals. Brilliantly written, refreshingly different and only a very small scattering of Americanisms to jolt the unwary reader back to the 21st century. Five stars.