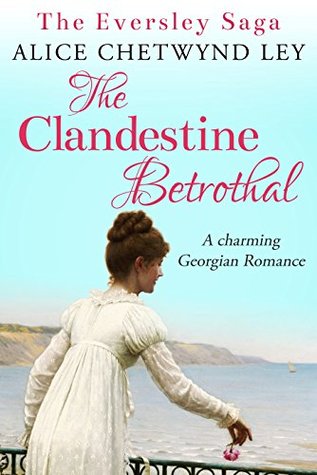 This was an unexpected delight. I’ve seen Alice Chetwynd Ley’s books bobbing around for a while now, but this is the first time I’ve read anything of hers. It’s a fairly slight story, but given its age (55!) it’s worn remarkably well. Ley’s writing career overlapped with that of the great Georgette Heyer, so it’s inevitable that her writing is heavily redolent of Heyer, but it’s none the worse for that.

Here’s the premise: Susan Fyfield is, at seventeen, finally leaving school. But what does her future hold? She’s an orphan, although a wealthy one, and dependent on her aunt’s kindness for a home. She knows very well what she would like her future to hold – one Hugh Eversley, dashing older brother of her best friend, Georgiana Eversley. She’s heard everything Georgiana can tell her of Hugh, and glimpsed him once or twice. She even stole away from school to see him when she heard he was to visit a house nearby, and was very embarrassed when she was discovered hiding in the shrubbery, whereupon he very kindly drove her back to the school.

But when Susan returns to her aunt’s home and finds out that her gloating cousin Cynthia is triumphantly betrothed, she takes a step too far – she tells them that she’s secretly betrothed. And when Hugh takes pity on her at his sister’s ball, and Susan gets a bit tipsy, she blurts out her most secret dream to her aunt – that her betrothed is in fact Hugh Eversley himself. The aunt doesn’t entirely believe her, but she feels she’s going to have to confront Mr Eversley herself to make sure of the truth, so Susan naturally feels she has to rush round to his lodgings to warn him. Whereupon he takes pity on her again and suggests going along with the secret betrothal for a while.

So far, so not very believable. He’s a leader of society, a notorious rake (aren’t they all?) and determined avoider of matrimony, and she’s a chit of a girl barely out of the schoolroom. To be honest, pretty much everything up to this point becomes a matter of conscious suspension of disbelief. Not so much Susan’s daydreams and childish impulsiveness, because she’s very immature, as young girls leading sheltered lives tended to be in those days, but that a man like Hugh Eversley would take any interest whatsoever in her defies credibility. And yet… despite the rakishness and society gloss, he’s actually a very nice man at heart, who sees Susan’s vulnerability and wants to spare her more pain. And of course, he’s only twenty-seven himself, so not exactly the jaded older man so beloved of Heyer. A ten year age gap isn’t at all unusual in the Regency, so it’s quite easy to believe that he’s attracted to her right from the start, while telling himself he’s just taking a brotherly interest in his sister’s friend.

From this point, anyway, the plots runs on swimmingly, with the discovery that Susan isn’t her aunt’s niece after all, but a foundling of some sort, and the story becomes largely about finding out just who she is and why she was handed over to her ‘aunt’ at all. Needless to say, it’s Hugh who beetles about trying to find answers and discovering along the way that he’s very much in love, without quite knowing what to do about it.

The author neatly sidesteps some of the hackneyed plot devices so beloved of Regency romances. So Susan runs away, but to a very safe harbour, and (apart from that brief visit to Hugh’s lodgings, which would have been quite beyond the pale) is never unchaperoned with Hugh. She even grows up visibly, which makes Hugh’s feelings even more credible. And Hugh? Ah, I do love me a sensible hero. I wasn’t much enamoured of his continued pursuit of the actress, and although this sort of comes right in the end, I would still have liked him to acknowledge the wrongness of loving one woman while chasing another, however platonic the chase might have been.

Like all Regencies of the era, it’s short on passion and long on mannerly restraint, but the writing is impeccable, the Regency atmosphere is faultless and the book is dripping with charm. I only knocked a star off for a degree of incredulity in the early chapters and that lack of passion. Four stars.