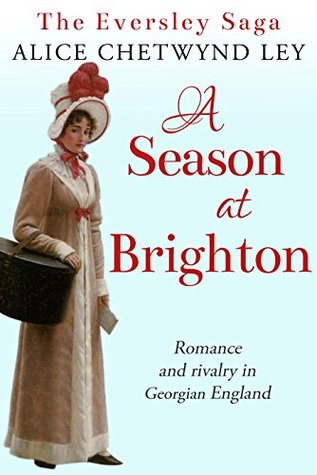 The third book in this series picks up another few years further on, and follows the rejected suitor from the previous book, Lord Pamyngton, and a new family, the Denhams, who have an abundance of daughters to be married off. Heroine Catherine (Katie) first meets Lord Pamyngton when she is in dire straits, having run away from home and fallen into the clutches of a none too respectable man. Lord Pamyngton rescues her, and discovers to his surprise that he himself is blamed for her predicament. Keeping his identity a secret to learn more of this situation, she confides in him and is later mortified to realise who he is, and that he practised such subterfuge on her.

So begins, rather awkwardly, their acquaintanceship, although I have to confess that it seems odd they never met before when they are close neighbours and the viscount even bears a family resemblance to his parents. But I’m always prepared to allow a book its initial premise, however unlikely, so let it pass.

The story then shifts to Brighton, where the married sister lives and where Lord Pamyngton has also gone, and once again Katie gets herself into scrapes of one sort or another, whether more from innocence or foolishness, it’s hard to say. I’m not a great fan of heroines who do incredibly stupid things (like running away and forgetting to take any money, for instance), and Katie is particularly stupid in that way. However, given the era in which it was written and the influence of Georgette Heyer, who loved to have her very young heroines scampering about the countryside, I suppose it works.

It’s fortunate that our hero, Lord Pamyngton, is sensible enough both to know his own mind and also to know Katie’s proclivity for getting into scrapes, so he helpfully keeps watch over her, enabling him to be on hand to rescue her with rather more plausibility than is usual in this kind of tale. The plot unravels in a fairly predictable and melodramatic way, but the writing is as amusing as ever and I enjoyed it all enough to give it four stars.