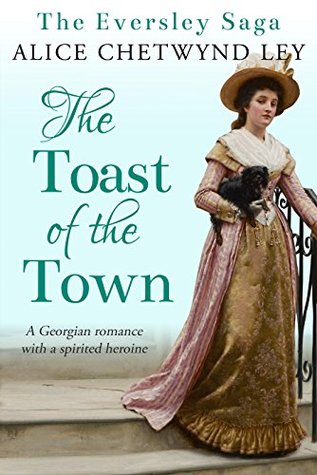 Another pleasantly undemanding read, light-hearted and very much in the Regency romp style of Georgette Heyer. This follows on from The Clandestine Betrothal, and although it isn’t essential to have read the previous book, it does make it a little more enjoyable to have some understanding of the background.

Here’s the premise: it’s four years after Hugh Eversley married Susan Fyfield, and they’re in anticipation of their second child. Hugh’s lively sister, Georgiana, an old school friend of Susan’s, is now twenty-one, the eponymous toast of the town, and has already turned down six different suitors. She’s a restless spirit, and Susan is sure that all she needs is a husband and children to settle her down. Accordingly, she has filled their house with guests to try to get Georgiana successfully paired off. Among the eligibles are Lord Pamyngton, a gentlemanly but dull viscount, and Henry Curshawe, brother to George Eversley’s very boring betrothed.

Georgiana is bored by this dull house party. She doesn’t like any of the Curshawes, and doesn’t take Lord Pamyngton’s gentle pursuit of her seriously. But one day she decides to take out Hugh’s curricle and matched pair for a spin, and her high spirits get her into trouble, throwing her (literally!) into the path of perhaps the one man who’s unimpressed by the very beautiful Miss Eversley, Dr John Hume. He ticks her off soundly and when she retaliates in kind, the stage is set for each of them to deeply dislike the other. So much so, that when the youngest Eversley brother, Freddy, challenges Georgiana to make the doctor fall in love with her, she accepts at once.

After this, things hum along nicely, and I really enjoyed the banter between the two, plus Georgiana’s ingenious attempts to entrap the good doctor into a declaration. But of course things don’t quite go to plan, and Georgiana has to suffer a great deal before she begins to understand her own heart and reaches her happy ending. The other members of her family as well as her two suitors act as facilitators or obstacles along the way.

I did have a couple of grumbles. One is Georgiana’s brother George (and what sort of family has a George and a Georgiana, anyway?). George is betrothed to the World’s Dullest Girl ™ and seems to have a very cavalier attitude towards her, looking forward to the time when they’ll be married so that he doesn’t have to pay her much attention, for instance. I kept expecting him to see the light and realise that she was the WDG ™, but he never did. George was rather sweet in The Clandestine Betrothal, so it was a sad comedown for him.

The other grumble was the good doctor’s cousin, who’s perfectly qualified to be a doctor’s wife, is desperately in love with him, the whole family expects them to marry and he ends up chasing after the entirely unsuitable and above his station Miss Eversley. And poor Anne isn’t even given the sop of a secondary romance to heal her broken heart. There was a throwaway line about her being young and meeting someone else in the future, and that’s all the thought she gets. I was very sad on her behalf. Georgiana’s other suitor, the gentlemanly Lord Pamyngton, gets his moment of glory in the next book, so his broken heart will be mended.

All in all, an enjoyable read in the old-fashioned style. A solid four stars.