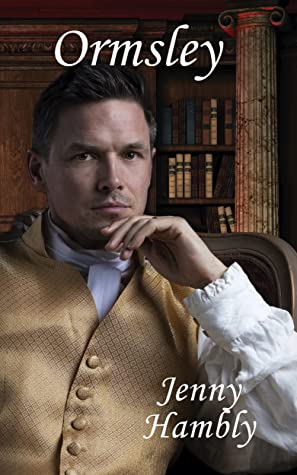 Another stellar read from Jenny Hambly, which I read more or less in one sitting. Lovely characters who feel like the sort of people you could actually meet in real life (and enjoy spending time with), beautiful writing and a perfectly evoked Regency with no anachronisms that I detected.

Here’s the premise: Hugh Brandforth, the Earl of Ormsley, returns unannounced to his estate after a futile pursuit of a wife. He’s thirty-seven, and was enjoying his discreet dalliances with married women too much to bother marrying himself, but being the only son, his ageing father had decided to secure the succession more firmly by taking a second wife, younger than Hugh. She produced a son, Henry, but Hugh has no love for his stepmother and her mother, and has belatedly decided to do his duty and find himself a sensible wife who won’t be difficult and will definitely not expect him to love her. He doesn’t believe in love. But it’s proving to be trickier than he’d supposed, so he’s not in the best of moods when he arrives home.

It’s not the homecoming he might have wished for. The gates are locked, for one thing, and then he finds himself berated by his old nurse for neglecting his little brother, accosted by an aggrieved woman, who is a complete stranger, when he mistook her for the boy’s nursemaid, and even the woman’s coachman is disrespectful. It’s a bit much for an earl to put up with.

But who’s this aggrieved woman, I hear you ask? Why, that’s the heroine, Miss Cressida Harrington, who has leased the dower house from the Countess of Ormsley, in order to escape from Bath rather precipitately. She was about to receive an unwelcome proposal from a notorious rake, and feared he was about to resort to heavy tactics to ensure her acceptance. But that’s not the sort of marriage she wants. She was once betrothed to a man who then died, and she’s not about to settle for something less than the perfect love she shared with Robin.

This is quite a lot of groundwork to get past before the story properly gets underway, and quite a bit of it is upfront in the first chapter, which describes Hugh’s childhood and upbringing in some detail. It’s very much the way Georgette Heyer would have done it, too, but for my taste I think I prefer to uncover the characters’ histories in dribs and drabs over many chapters.

From then onwards, the story unrolls without too many surprises. Hugh learns how to love, and Cressy learns that her first love was very different from the grown-up passionate feelings she develops for Hugh. In between, Henry learns to become less wild, Hugh’s youthful stepmother and her mother throw spanners in the works, Hugh’s loose-lipped friend does his unwitting bit to muck things up and Cressy’s erstwhile suitor turns up to drum up a little macho maleness in Hugh’s breast. And there are some family secrets to emerge, none of them terribly surprising, but nicely done.

There’s a lot to be said for a pleasant and undemanding read like this. There weren’t any great obstacles to the main characters’ romance, apart from their own reluctance, that is, and after the initial hostilities their sparky exchanges are perhaps a little flat. But they’re both sensible, their moments of high drama are understandable, and thank heavens for people who talk openly to each other, and have wise friends to steer their budding romance away from the shoals of the Great Misunderstanding and into open waters. And at the end, most of the antagonists have repented somewhat and are Doing the Decent Thing. And if that makes it seem slightly dull, overall, that’s partly a reaction to the sheer brilliance of Carteret, which was so epic that almost anything would be a bit of a come-down afterwards. So it doesn’t quite reach the heights of five stars for me, but it’s a very, very good four stars, and highly recommended.