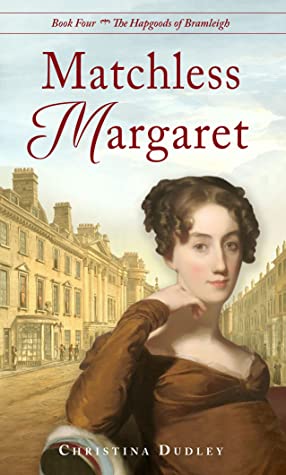 This is two parts Bath Tangle and two parts Cotillion, and a smidgeon of Northanger Abbey, but at the same time is entirely itself. Christina Dudley is surely one of the finest Regency authors around – original, clever, literate and very, very funny. Every book in this series is a delight, even though they are all completely different, and each one a unique masterpiece.

Here’s the premise: Margaret Hapgood is the third of the four daughters of Squire Hapgood of Bramleigh in Somersetshire. The two eldest are now married, the mother indulges in ill-health, so it falls to Margaret to manages the family’s affairs. This she does so thoroughly that when her uncle, Alwyn Arbuthnot, falls once more into financial difficulties, Margaret is deployed to take him to Bath, accompanied by her mother, to find him a wealthy bride so that he won’t be a drain on the squire’s purse any longer.

This he’s perfectly willing to do, so they find cheap lodgings – and almost the first person they meet is the wealthy widow he courted in London, whose son whisked her to safety out of the eager hands of Uncle Alwyn. The son, Dashiell Waite, is a soldier recovering from a leg injury received in the war with France, and he meets Margaret when she accidentally knocks his crutches from under him. He’s accompanied by his friend, Charles Haworth, another war-wounded ex-soldier, now the unexpected owner of a country estate. They are joined in Bath by Dashiell’s betrothed-from-the-cradle cousin, Charmaine Blakely, and her mother, and this little group form an uneasy friendship, fostered by Charmaine’s unexpected friendship for Margaret.

Charmaine is, in many ways, the driver of this plot, rather than Margaret. She’s the character who most reminds me of Northanger Abbey, for she’s the worldly-wise and flirtatious Isabella to Margaret’s innocent Catherine Morland, not exactly leading Margaret astray but using her as a go-between as Charmaine tries to provoke Dashiell into uncharacteristic jealousy, or at least some sign of passion, and manipulates everyone around her to do her bidding. Even though we can see that she doesn’t much care about Dashiell and is a thoroughly cold and selfish person, she still has flashes of humour and even friendliness. It would have been so easy to make her an out and out villain, but she’s far more layered than that. Her desire for Dashiell to court her properly is actually fairly understandable, although her assumption that he should simply ‘know’ what she wants is perhaps a little unrealistic.

I mentioned the echoes of Heyer’s Bath Tangle and Cotillion, which lies not so much in the characters involved but in the situation. The misaligned but betrothed couple, Charmaine and Dashiell, are reminiscent of Bath Tangle, while between Charmaine and Dashiell, his lovelorn friend Haworth and Margaret, Alwyn and Mrs Waite, we have three of the four couples for our cotillion. The fourth couple is Sir Dodkins Hargate, who takes a shine to Margaret because she reminds him of his dead daughter, and his old friend and neighbour, Mrs Turner. How these four align and realign themselves, and the right couples end up together is the subject of the second half of the book, and I won’t spoil it by elaborating on that. I did find it just a tad surprising, and I’d be interested to know just what Dashiell will do for money now, because it really wasn’t explained.

Nevertheless, this was another fine five star read for me, and even the Americanisms [*] didn’t bother me so much in this book (only the use of ‘passed’ instead of died or even passed on or passed away, but it’s a minor point in the overall scheme of things). The Regency Dudley evokes seems very authentic to me and I thoroughly enjoyed the Bath setting as a variation from the rural countryside (although I confess I wondered whether Sydney Gardens would really be holding outdoor breakfasts in the winter). This probably could be read as a standalone, but it would be far better after reading the series in sequence, to get the full picture of the Hapgood family background. And now on to Edith’s tale (and the faithful Lionel, I hope).

[*] The author tells me she’s fixed these.