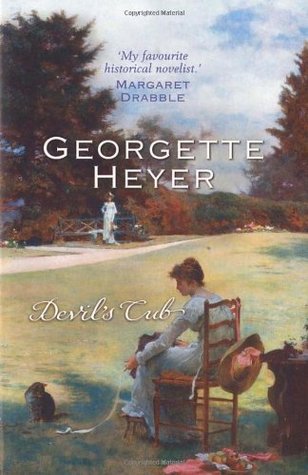 Lord, that was tedious. I know a lot of Heyer fans love this book, but apart from a brief moment in the middle, I strongly disliked pretty much everything about it. An obnoxious hero, a wildly implausible plot, a stupid heroine and an array of boringly verbose side characters — yawn.

Here’s the premise: wild Dominic Alistair, the Marquis of Vidal, and heir to the Duke of Avon, has finally been forced to flee the country because of a duel. Deciding that he might as well have an amusing companion for the journey, he arranges to run off with Sophia Challoner, who’s been flirting outrageously with him and seems to be ripe for any mischief. She agrees to go to Paris with him as his mistress, although she hopes that the ensuing scandal will force him to marry her. But the arrangements are intercepted by Sophia’s older sister Mary, who decides to save her sister from such a terrible fate by running off with Vidal herself. Naturally, she expects him to send her promptly home when he discovers the deception, and is horrified when he shrugs, says in essence, ‘You’ll do just as well’, and forces her to go to France with him. It’s only when she shoots him in desperation that he realises she isn’t as morally dubious as her sister.

And this is where the book veers off the rails of credibility. Having confidently assured his parents that there’s no danger of him being forced to marry the so-bourgeois Sophia, he now decides that he absolutely must marry Mary, who may be more protective of her virtue but is still just as bourgeois as her sister. This made zero sense to me, frankly. She’s still a nobody who chose to run away with him, so there’s absolutely no need for any question of marriage, especially from a future duke. And frankly, nothing about Vidal suggests that he has the slightest interest in honourable behaviour, since he’s been an arrogant, violent, selfish and thoroughly horrible person from page 1. And since Mary declares that she doesn’t want to marry him anyway, you’d imagine that would let him off the hook.

However, the shooting ushers in the only part of the book that is remotely entertaining, in the manner of many later Heyers. Vidal is slightly injured by the shooting, and Mary takes charge of him, forcing him to see a doctor, to be bled and then to eat a bowl of gruel, and generally bossing him (and his servants) around and not taking no for an answer. The conversations between Vidal and Mary are priceless. I could have done with a lot more of that.

But then we get to Paris, where we encounter the sub-plot, Vidal’s cousin Juliana, who has fallen in love with another nobody, called Comyn, a painfully correct young man. Juliana is the sort of female who is all too frequent in Heyer’s works, being young and stupid and prone to fall into hysterics at the slightest provocation. I disliked her quite intensely. Comyn was rather funny, though. Add to this mix Vidal’s mother, the Duchess of Avon, or Leonie, the heroine of These Old Shades, who is happily not prone to hysterics, but instead spends most of the book repeatedly stating that Vidal must (or must not) marry one of other of the various women involved. There are a number of Vidal’s other relatives who put in an appearance, too, who also talk at great length about what Vidal and Leonie and Juliana (and who knows who else) should or should not do. I suspect that Heyer thought all this dialogue was very witty, but since it didn’t advance the plot one iota or illuminate the characters involved or (frankly) serve any purpose whatsoever, I beg to differ. And then there’s the Duke of Avon himself, of whom everyone is terrified, but here he’s no more than a fairly implausible plot device (he just happens to be at the right tiny little inn at the precise time he was needed? Really?).

As for Mary, what can I say about a woman who’s fallen in love yet refuses to marry the man because she’s not worthy of him? And keeps on refusing, even when he professes his love? Stupid girl. I’ve given this two stars because… well, it’s Georgette Heyer, so the writing is superb, as always. But the plot, the characters, the romance? Not so much. It just made me cross. But at least now I can tick it off my to-read list.