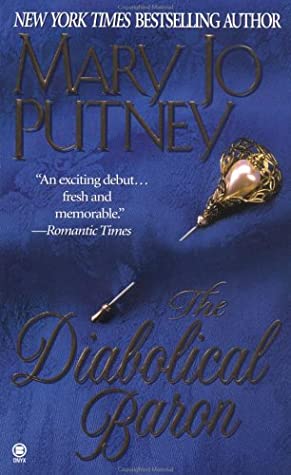 This is a very early Putney, possibly her first publication. My only previous contact with her work was The Rake, which I liked for the passion between the protagonists and disliked almost everything else about it. This I liked much, much more, although with a few little niggles, and one major problem.

Here’s the premise: Jason Kincaid, Lord Radford, is thirty-five years old, and is the usual sort of super-charged hero for the era – rich, handsome, a Corinthian, arrogant and completely selfish. But duty is catching up with him, and he knows it’s time he married and got himself an heir. He’s not interested in a love match, after a love affair went disastrously wrong some years ago. He’s never found anyone to compare with that first love, so he’s happy to settle for any respectable girl. He doesn’t know one from another, so he asks his friend George Fitzwilliam to draw up a shortlist and he picks a name from a hat. To spice things up, he makes a wager with Fitzwilliam on the outcome.

The name he picks out is Miss Caroline Hanscombe. He knows nothing about her, beyond her eligibility, but he sets out with single-minded determination to court and win her. Caroline is a quiet, self-effacing person, happy to lose herself in her music, which she not only plays but also composes. It’s her solace in a life that’s not particularly enjoyable. She’s going through the motions of a season, in support of her younger half-sister, Gina, but all she wants is to retire to live with her beloved aunt and write her music. Lord Radford’s pursuit confuses her, the baron himself frightens her, she doesn’t love him and she certainly doesn’t want to marry him. But her father and step-mother put her under intense pressure and she feels obliged to accept his proposal.

So far, we seem to be heading for a standard marriage of convenience story, but not so. There are two other people to play a role in this story. One is Captain Richard Davenport, returning from war to the neighbouring estate to Radford’s, who is just as musical as Caroline. The other is Caroline’s aunt, Jessica, a widow, who just happens to be Radford’s long-lost first love. And so we find ourselves in a different trope, the betrothed-to-the-wrong-person story, as Caroline gradually falls in love with Richard, and Jason finds himself just as drawn as before to Jessica, who is every bit as super-charged as he is.

In many ways, this reminds me of Heyer’s Bath Tangle, with the same two pairs, one vibrant and high-spirited, the other quiet and gentle, with a mismatched betrothal to be sorted out. Naturally, as in that book, so with this, the tangle is eventually unravelled and the characters end up in the right pairings. Even though it’s obvious that it will work out, somehow, it’s still pretty emotional for the participants as they wrestle with their consciences and try to do the right thing.

I think it could have been sorted a lot more easily if Caroline had had the gumption to go to Jason and ask him directly just why he wanted to marry her. She assumed that he must feel something for her, even though he didn’t show it, but that was pretty naive of her. Many Regency marriages were pragmatic affairs, and a man of that age and temperament might very well prefer that sort of arrangement. If she’d learnt that she was just a random choice, she could have jilted him a lot more easily. Mind you, that would have been a fairly tame ending. Putney’s actual solution was a lot more dramatic.

I mentioned some small niggles, and one major problem. Let me deal with the problem first. Richard is the heir to an earldom, but he arrives at the estate under a pseudonym while he decides whether he wants to take up the earldom or allow it to pass to the next in line. Erm… no. Big, big no-no. He’s the heir, and he doesn’t get to choose whether to take it or not. It’s his, and that’s the end of it. He can choose whether to claim the title officially or not, but he can’t pass it on or refuse it. He’s the earl, whether he likes it or not. The property is unentailed, so he can give that away if he chooses, but not the title. Unfortunately, the whole premise of the book is built around whether he becomes the earl or not.

The other niggles are trivial. There are a very few Americanisms, and also some surprising typos, which a halfway decent editor should have caught. I disliked that some of the background characters were pretty evil people, cartoonish villains without a redeeming feature amongst them, especially Caroline’s horrible father. In many ways, this would have been a more interesting and more powerful story if Caroline hadn’t been blackmailed into accepting Jason’s proposal, but had made the decision for herself, not enthusiastically, perhaps, but in a spirit of duty to help her family. I also wondered a little why Jason and Jessica gave up so easily on their early romance. He, at least, could have made some effort to find her. But that would have spoilt the whole story, so fair enough. And I suppose I could quibble about the length of time the four of them took to sort out their difficulties.

But very little of this mattered while I was reading. I was totally swept up in the story, feeling every nuance of their emotional highs and lows, quite unable to put the book down. I liked all the main characters, particularly the two ‘quiet’ ones, who were drawn with greater subtlety, I thought, and I loved all the musical detail. It made Caroline, in particular, feel very real. Putney is a powerful writer, and although this book wasn’t perfect, I can’t give it less than five stars.