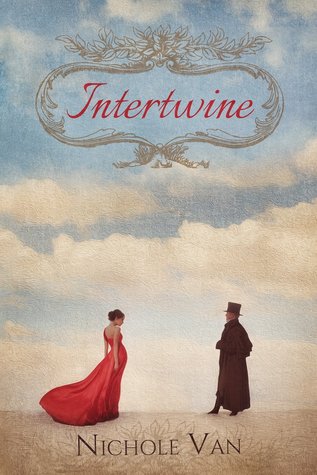 This is one of those books where it’s best to just go with the flow and not question the logistics too much. As such, it’s a pleasant and undemanding time-slip romance from modern to Regency. I would have liked a bit more rigour, but then I’m probably not the ideal audience for this book.

Here’s the premise: in 2012, Emme Wilde is in love with the man she knows only as an old-timey picture in a locket, and real life, melodramatic as it sometimes is, just can’t compare. Determined to find the truth behind the locket, she travels to England to stay in an old cottage near to where the man in the picture must have lived, traced through the painter of the picture. So there she is in a cottage in the middle of nowhere, in the middle of the night, in the middle of a humungous storm, when the lights go out (because of course they do!). So does she go down to the basement? Of course she does, but she fortuitously happens to be wearing a full length nightgown and wrap, and just happens to be carrying her handbag (purse), because of course she is. She’s going to need that when — Crack! Oh, there she goes, back to 1812, where James Knight is (coincidentally) riding home in a (coincidentally) humungous storm when he catches a glimpse of white at the base of the old oak tree.

Now it took a while to get to this point, and I get that authors like to set the scene in both settings of a time-slip, but for me as a reader, when I know beyond all doubt that something major is going to happen, I appreciate it if the author gets on with it. A lot of the background to Emme’s life seemed (initially, anyway) not terribly relevant. Some of it (like why she’s carrying her handbag, and all the useful things in it) becomes pertinent later, but the whole disaster-prone build up seemed over the top, to me. And the funny part of it is that all the improbable events actually happened to the author’s parents, which only goes to show that truth is stranger than fiction (and that even true stories can be too unlikely to use in a work of fiction).

In order to delay the oh-no-I’ve-gone-back-in-time moment, Emme is rendered unconscious by the storm, and even when she wakes, she’s suffering from amnesia. This is a very popular trope, and I completely understand why, but I still heartily dislike it, mainly because it’s usually a magic MacGuffin, a device to sidestep an issue or create an artificial obstacle, and invariably the person recovers completely afterwards. It’s a plot device, basically.

In this case, the author cheats a bit, and this grated on me the whole time Emme was amnesiac. Firstly, even though Emme knows nothing about herself, not even her name, she’s referred to by name the whole time. It’s ‘Emme woke’ or ‘Emme said’, and the purist in me wondered why, when we’re in her point of view, she doesn’t think of herself as ‘the girl’ or something equally blank. This is a case where using first person (‘I woke’ and ‘I said’) would have worked much better.

And secondly, although her mind is supposedly blank, there’s an Alter-Emme voice in her head making snarky and very 21st century comments. Now, this is actually very funny, and the culture clash is one of the strengths of the book, but it does dilute the Regency elements somewhat to have this very modern chatter in the background. It makes it seem like a contemporary romance, actually, and as such it works pretty well.

The romance is rather good, with the two protagonists gradually sliding into it, but all the time aware that they have no idea who Emme (the girl!) is, or whether she’s even a respectable person, or married, or on the run after some heinous crime. It’s a very plausible obstacle. I did wonder how it was that Emme, with her American accent and modern speech, managed to convince these upper class people that she was as much gentry as them, but this is waved away with a quick line about her copying their accent. Probably with time travel stories, it doesn’t do to agonise too much over the logistics! My bad.

Eventually, Emme is reunited with her handbag (purse), and this is another quirk, in that James consistently calls it a purse, rather than simply a bag. Ladies didn’t have handbags (purses) in those days, they carried a small cloth bag called a reticule. But that’s just me over-thinking things again. The purse reunites Emme with her 21st century memories, and leads to the funniest section of the book, where she introduces James to modern tech (doesn’t that cause a tear in the space-time continuum or something?).

From then onwards, it’s a gallop to the happy ending (at 88% on my Kindle; there’s a whole heap of stuff after the end), by way of a tornado (in England? But by this time I was in ‘whatever’ mode). You’ll have to read the book yourself to see how they reconcile the whole 2012/1812 problem, and how they deal with the rest of the family. It’s a lot of fun, if you can switch off the analytical part of your brain. Sadly, I couldn’t, and the book just wasn’t Regency enough for me, but for anyone less picky than me, this is a fun, lightweight read, and the start of a whole series. Three stars.