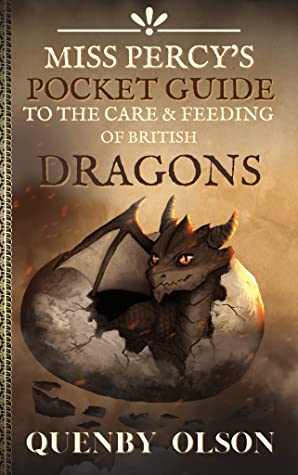 This book was an absolute delight. I love a book that takes me by surprise, and this book is surprising in spades. It features a downtrodden spinster, aged forty, a diffident vicar, aged more than forty, a motherly cook/housekeeper, and an impoverished but charming villain. Oh, and a dragon, but that part isn’t so much of a surprise, given the title.

Here’s the premise: Miss Mildred Percy lives in a tiny attic room in her younger sister’s house, the archetypal poor relation, treated as an unpaid servant looking after the children, excluded from social events and thoroughly badly treated. And she’s been in that position for so long she barely even thinks about it any more. But then one day a distant relation leaves her an inheritance, which turns out to be a motley collection of… well, all sorts of odd things, including journals and other notes. Since this intriguing collection conveniently arrives when her sister is out, and Mildred knows it will be commandeered or, worse, thrown away, if her sister finds out about it, she hastily hides everything in her room, and drags the empty box outside to hide it in an outhouse. Whereupon she is spotted and then assisted by the local vicar.

This scene is so delicious, I just can’t tell you how much I enjoyed it. Here’s the downtrodden and mousy spinster caught in a rebellious act, while the mild-mannered and fairly reclusive vicar, who has never dared to step beyond the formalities with her before, enters into the spirit of the thing with the utmost aplomb. In no time, he has volunteered to help her investigate the collection by storing some of it at the vicarage for safekeeping from the acquisitive sister. And amongst the items of interest is an odd sort of stone. A rather egg-shaped stone…

The hatching of the dragon is beautifully done, along with the realisation that small, winged, fire-breathing reptiles are not well-suited to life in small English villages. The race is on to find a secure home in which to raise the baby dragon, keeping him safe from would-be thieves and disbelieving neighbours, and perhaps find an expert who might be able to advise them. From there the story unfolds pretty much as you would expect. But it’s not really the story that’s the most interesting element of this book, because the style is one I’ve never encountered before – quirky, chatty, half rambling and repeatedly breaking the fourth wall to address the reader, directly or indirectly. I loved it, and found it laugh out loud funny, but I can imagine that not everyone would like it, so read the sample before buying.

Anyone expecting a romance might be in for a let-down, because, as romances go, this is the most low-key one imaginable. Also, since this is the first of a series which seemingly features the same characters, there doesn’t seem likely to be any increase in the romantic element going forward. If that’s a big thing for you, then this is probably not the book for you. But I loved, loved, loved the two principal characters, I loved the writing style, and I adored the baby dragon. If you’re looking for something a bit different and you like dragons, then you should drop everything and read this at once. Five stars.